For those that plan to visit Porthleven in the future, it might be interesting to touch upon what it was like in the past. The history of Porthleven is a rich one, the Porthleven that we know and love now is very different to what it once was. We write this blog in the hope that it will enrich the experience clients have with our Cornish Traditional Cottages.

The origins of the name are subject to a multitude of different myths and theories; however, there are two that prevail over the rest. The first theory implies that it is derived from the Cornish terms ‘porth’ and ‘leven’, meaning port and smooth respectively. The other believes instead that it was derived from ‘porth’ and ‘elvan’ who was a 5th century saint famed for landing on these shores in order to preach his Christian faith. 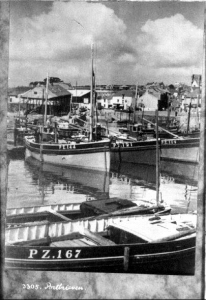 In the 14th century the area was primarily made up of fisherman, however, by the 17th century they were joined by a number of other tradesmen such as miners and farmers. Whilst it has been stated that there were a number of different settlements to occupy the area, it was only in 1846 that it was formed into a fully-fledged modern parish. The parish took land from the parallel boundaries of Breage (in the west) and Sithey (in the east).

Porthleven was the unfortunate victim of circumstance; it had gained a reputation for producing a significant number of shipwrecks – the result of poor positioning. These were generally caused by the south westerly gales and the mountainous seas – causing an unprecedented number of boats to become trapped. This was the catalyst for the production of a port custom designed to act as a refuge – a safe haven. After approval was gained in 1811, it went under construction in a process that took over 14 years. Many believe that had their not been an overwhelming need for a port, Porthleven would have remained a relatively small fishing bay.

Fishing was huge in Porthleven; the main catches were pilchards, mackerel, crab, lobster and crayfish. It wasn’t all plain sailing though (excuse the pun) as the harbour still had to withstand the ill effects of the weather, often becoming very damaged in the process. In fact the original harbour didn’t survive a particularly vicious storm and as a result had to be completely rebuilt.

Now whilst this isn’t a comprehensive account of the history by any means, it should be enough to give you a good idea of what Porthleven once was. Those who plan to stay here should definitely look at our distinct  holiday cottages in Cornwall. We promise you will never look back.

be the first to recieve our Latest Offers and news from Porthleven...